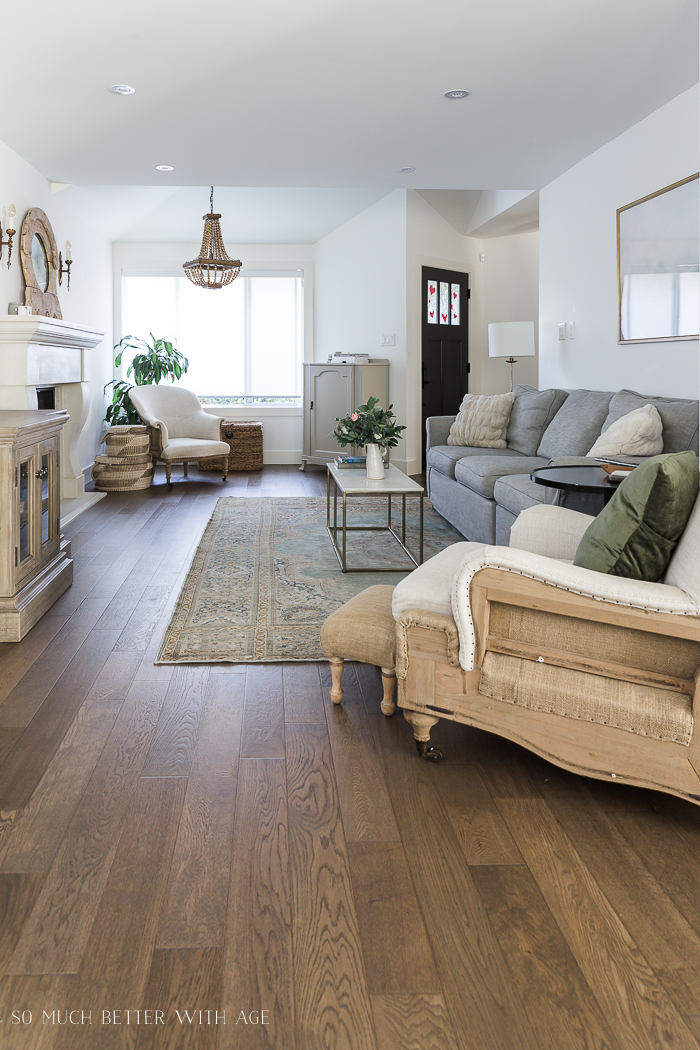 You’ve just bought a home close to the inner-city area. The floor plan is on the smaller side, but with the price and location being what it is, you were more than happy with what you received. It’s not until the movers start unloading the furniture that you notice the big, glaring problem: Your living room has turned into the home décor equivalent of a New York city subway. Everything is sooooooo loooong! You try pushing the couches as far to the edges of the room, and the problem only becomes worse. We at Décor Steals are here with good news! We’ve compiled a list of long living room ideas –  tips, tricks and optical illusions to make your home seem much more normally proportioned. Keep reading to see how professionals such as Walt Disney World utilize their space to trick the eye into seeing what they want.

Divide the space in your long living room

We kick off our long living room ideas with division! The easiest way to make a rectangle look less like a rectangle is to turn the rectangle into multiple squares. When arranging furniture, try to create several separately purposed areas to give people a break from the walls that extend into the infinity and beyond. Some examples of spaces could include a separate area for the television, conversation, and study. These areas can be defined even further using rugs.

Utilize the other dimensions first

If you are wondering where to place that long couch, the very last idea you should consider is up against the long wall. Turn the couch to go across the room, rather than along the side. This tip goes hand in hand with dividing the space. Using vertical space is also an option! Tall bookshelves and stacked photos draw the eye upwards rather than across the room.

Get creative with shapes in your long living room

The mind is designed to recognize patterns. If a room contains a lot of red, for example, then other red objects that were not meant to be on display will become a lot more apparent. The same is true for shapes. If your room contains a lot of rectangles, you’re more susceptible to even more rectangles, including the shape of the room. Throwing in round items such as tables, an ottoman, or lamps will help take the mind away from the rectangle fixation and therefore makes the room feel shorter.

Anyone who’s been to Walt Disney World knows that Main Street seems like it goes on forever, with Cinderella’s Castle a huge monolith looming in the distance. This is an optical illusion! In order to make Main Street look longer, Disney Park Imagineers designed the buildings so as they move back in space, they get physically smaller. Similarly, Cinderella’s castle is not near as large as we think it is, and it gets considerably shorter as the building goes up in space. We can use this trick for the exact opposite effect as well. Instead of making something appear long by putting the smaller objects towards the back, make the room appear shorter by making all the largest objects towards the back of the room. This trick is called forced perspective. Any large couches, bookshelves, and cabinets could be put in the far end of the room. If you have a huge tv, put it on that side as well to make it look like a more normal sized tv compared to everything else closer to the entrance of the room.

The eye sees what it wants to see, and we can take full advantage of these tricks of the trade in your decoration. Your sofas aren’t just sofas, they’re shapes used to misdirect the eye. Your rug isn’t just a rug, but instead a way to compartmentalize what would otherwise be a much larger space. Use what you have to make your space into what you always wanted it to be, and see for yourself how you can transform a very long space into a much more manageable room. Please share your long living room ideas in the comments below!